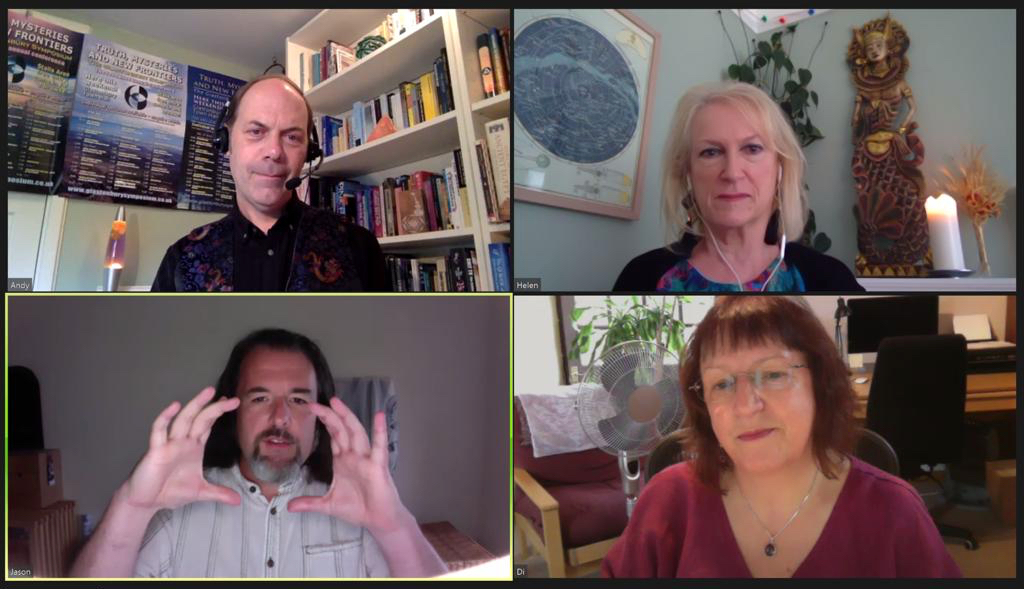 The Glastonbury Symposium was founded in 1991 by Roland Pargeter, who ran it for nine years, and to whom we pay tribute for founding the principles of the event. In 1999 the event was handed over to Sheila Martin, Andy Thomas and Karen Douglas. Karen moved on in the winter of 2004, and Andy and Sheila were then joined by Debbie Parkes. In 2008, Debbie was replaced by Di Brown.

In 2019, after many years of excellent service, Sheila amicably went on to new pastures, leaving Andy and Di as the main organisers, with the additional help of Helen Sewell and Jason Porthouse, both of whom have long been part of the Symposium.

There is also a remarkable support team who make sure the Symposium runs smoothly in all possible ways – see below!

Andy is a leading researcher into unexplained mysteries and is the author of the acclaimed The New Heretics, Conspiracies and The Truth Agenda, which explore the real foundations of truth seeking, paranormal phenomena and global cover-ups. His many other titles include Vital Signs and An Introduction to Crop Circles, seen as definitive guides to the mysterious and controversial circle phenomenon, and he is also author of books about history and folklore, including Christmas: A Short History from Solstice to Santa. Andy is founder of Changing Times, which holds events on mysteries and truth issues in South East England, and he also runs Vital Signs Publishing.

Andy is one of Britain’s most prolific lecturers and speaks in many other countries too. He has made numerous radio and TV appearances. An annual speaker at the Glastonbury Symposium since 1994, Andy’s powerful presentations at the event are renowned. He became co-MC in 1999, a role he continues to this day, and he is one of the core administrators for the Symposium. 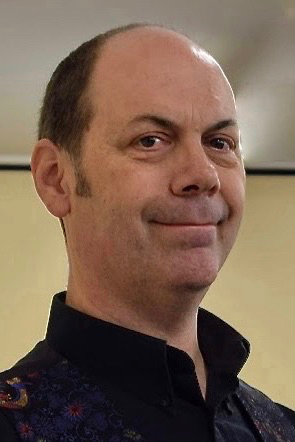 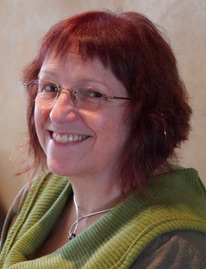 Di has been involved with the Symposium since 1995 where she began helping on a casual basis with door and desk duty. She’s also provided some acting skills for the event, being part of Andy Thomas’s more flamboyant earlier talks in a theatrical sense, playing characters as diverse as the Queen, an acolyte and a fluffy bunny, to name but a few…

In 2005 she moved from Brighton to the Glastonbury area and joined the front of house team. In 2008 she became one of the administrators for the Symposium and today works with Andy as co-organiser. Di is the main contact for bookings and is the person you get to speak to if you call our office!

Helen is a familiar face at the Symposium, having been involved since 2003. She has been our social media administrator for several years, as well as being Andy Thomas’s wife and our astrological consultant! Now Helen supports Andy as assistant MC for the event.

In the wider world, Helen studied with the Centre for Psychological Astrology (CPA) under the renowned Liz Greene PhD, and is a Relate-trained relationship counsellor. She gives lectures, personal consultations and writes for astrological journals and websites. Helen is one of the regular tutors for MISPA, the internationally-recognised Mercury Internet School of Psychological Astrology. This experience has helped enormously in her astrological couple consultations, and she runs her own general counselling practice as well as giving astrology readings.

More on Helen can be found at her website: www.astrologicalinsights.co.uk 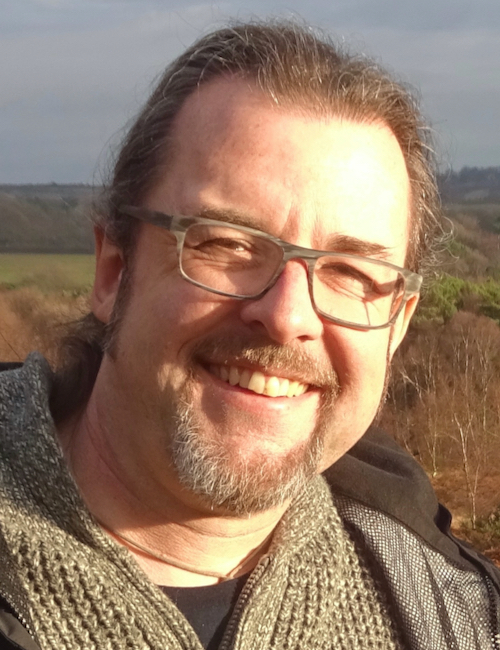 Jason is both technical advisor for the Symposium, and also the leader of our meditations on the Friday afternoon in the hall and on the Sunday afternoon in the Abbey grounds, where he manages to hold together a ring of sometimes up to 100 people come rain or shine!

Jason Porthouse works as a freelance documentary editor, working on programmes such as BBCs Panorama and Stacey Dooley Investigates… When not in an edit suite though, Jason follows a lifelong interest in spirituality and the metaphysical world. A qualified Spiritual Companion and alumni of Jan Day’s School of Being, he is particularly interested in exploring ideas around what being a man in today’s world really means, and how that feeds into relationships on all levels.

We wish also to express appreciation to our illustrious team of Glastonbury volunteers and hired professionals who help out at the weekend of the Symposium, especially our main lighting and sound coordinator Stuart Carr and our IT manager Martin Potts. Other important members who were big parts of the event for years include Alan Bertrand (sound), Tulki Jenkins (tech support) and Mell Turford (videos). Some of these characters can be seen in this picture shyly receiving accolades from the audience at the end of a Symposium! Other crucial people still involved include our key ladder, scaffold and banner-hanging expert Paul Perry (see right), those who staff the doors, cafe, and our merchandise stall, and all who help with the crucial get-in and get-out. Thanks go also to Jemma Cooper for additional help with PR. Some of these good people have been with us for years, others come in and out each year, but the team always works really well. Without them, the Symposium wouldn’t be what it is and they all deserve huge credit. 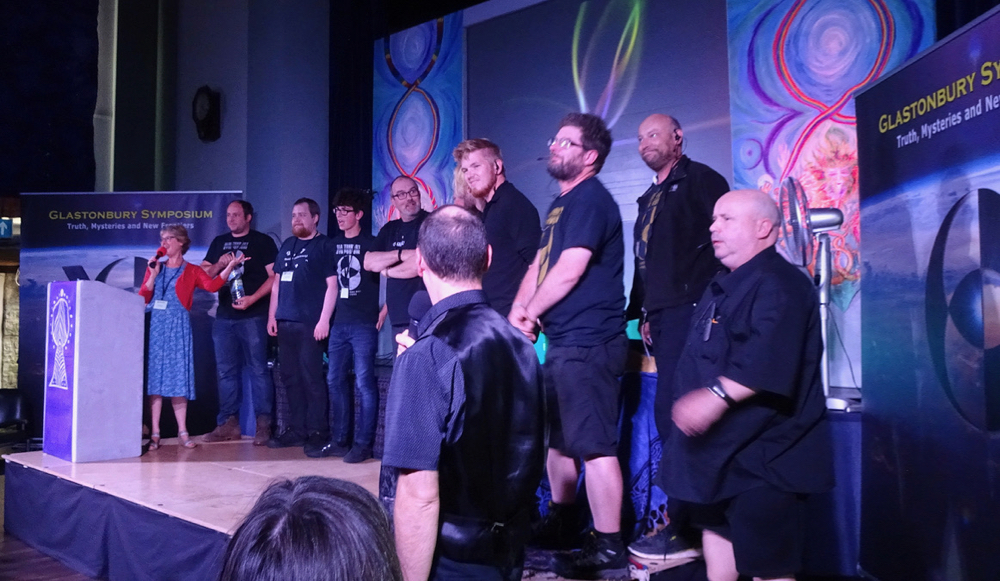 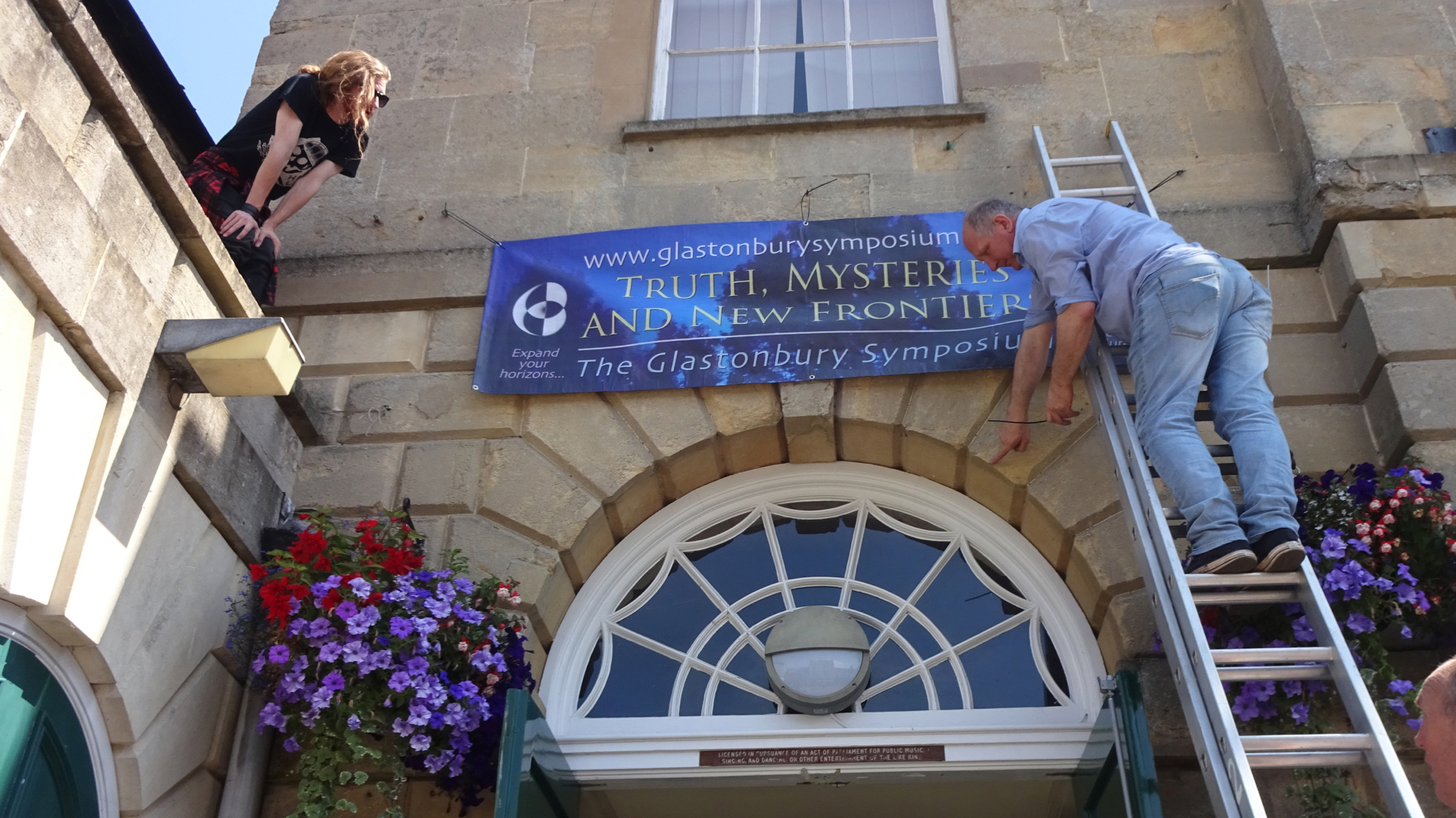 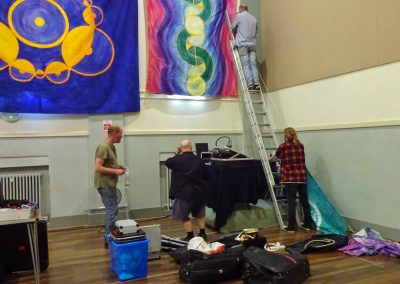 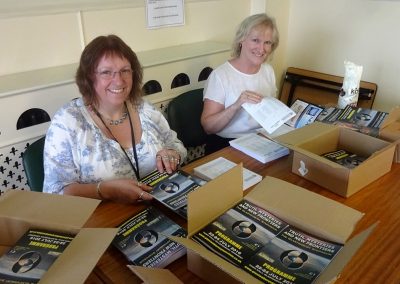 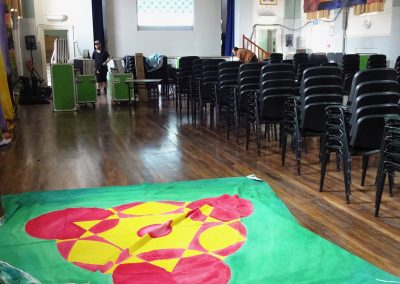 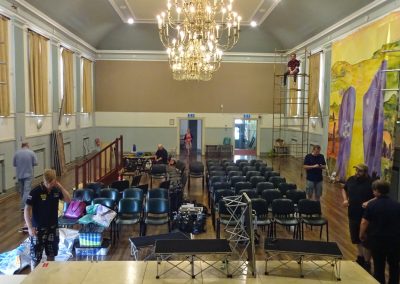